Yes, big boys can do this too..

Yes, Big Boys can do this too!

I get students in all shapes, age, gender and it is surprising to know how many people like to learn to play the piano in their twenties or thirties with the idea that they missed out on something when they were young.
And indeed it is true. There goes a lot of time into learning to play the piano, but it is an investment well worth making. You can lose friends, family, business and money in your life but you can never lose the music you once learned. It is an asset which will stay with you all your life.

Hence it is a good investment to make while you are still young, but there is no barrier to still do that while you are older. I know of a lady who started to learn the piano when she had become sixty and by the time she was sixty seven she had acquired her qualifications to teach the piano.

And so it was with Chris. He had a nice job working at a computer firm, but had repeatedly told his girlfriend about his love for music. And for this reason his girlfriend called me up with the question if I could give a 'voucher' for piano lessons. 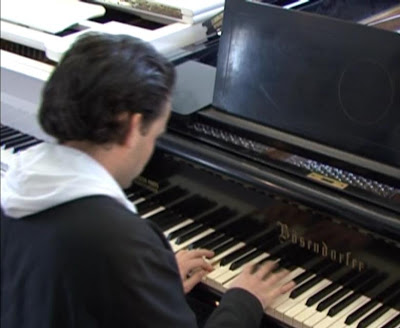 She would give it to him for his birthday. And so she did. And Chris went on a learning curve, which went quite fast and worked out well.

All Chris needed was a regular slot in his day of about half an hour a day for the necessary practise.

His sense of rhythm was already developed well, which gives the advantage of paying attention to the technical side of things. That can be quite cumbersome and if you want to learn fast, this does not mean you can take short cuts, because there aren't any.
But a teacher's job is to remove obstacles, which make the learning curve harder and longer as is necessary.
Posted by Art Zegelaar at 15:05