I recently decided to revive my desire to go through all Beethoven Sonata's and study the progress Beethoven made in his own composition techniques and look at the question, which since long occupies my mind. Composers do certain things in certain keys and of course surely in Beethoven's case this is only logical. He was a very good improviser and although Beethoven crafted his compositions like an architect, still improvisation will have been an important basis.

For this reason I decided to go through the Beethoven Sonata's according to their keys from C minor till B major. Of course this puts the key of Bb near the end, and who understands my relief may comment on it.

So we start with the first Sonata in Cm.

The first movement is in Sonata Form. Probably for the young Beethoven still no question about that. But where the first 4 Sonatas are 'grande' Sonatas this is the first sonata where Beethoven aims for shorter. Not only top pianists should be able to play his compositions he may have thought.

The first theme consists of rising broken chords in forte with quiet chord progressions in between. But the effect is a powerful symphonic opening in 22 bars with 8 bars coda.

The first Theme in Cm

The opening chord of Cm just happens with all C-minor Sonatas as we shall later see, but it is not standing on its own. It is itself part of the theme of rising notes. I display them here in its bare essential meaning. There are semiquaver upbeats to each note.

The second Theme in Eb

The second theme already starts in bar 32 with an interesting break of one bar before. It must be in contrast. And ofcourse it is. Since it is the relative major, there is no real modulation towards it. It just starts in Eb one bar after the first theme ended in Cm. It is not fierce but a cantabile melody with a quietly stepwise progressing harmony. 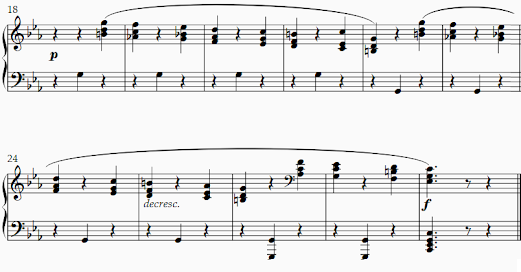 In the reprise nothing really happens, which is not pure Sonata Form, which is why I like to give this Sonata as a first to students, because it is so very wel suited to explain and understand Sonata Form.

In a classical sonata the second movement is a variation model on an Aria (song) theme. It is in Ab here. We will see that many techniques Beethoven does here, also happen in the next Sonata in Cm (the Pathetique). for instance bar 28:

Beethoven dispenses for the first time with a Menuet (or Scherzo/Allegretto) with Trio, which he finds obsolete or too old fashioned. He immediately proceeds with the last movement. The feel is prestissimo, but this is not necessarily the real speed. The bar is to be felt in 2 and this is a blink towards Haydn. The movement is supposed to be a rondo, but is really in Sonata form. That's the form Beethoven likes best. Because it is the last movement, the two themes are not really that much in contrast, but the first is in Cm and the second in Eb. They both convey the same lively feel of speed and that ofcourse gives it the suggestion of a Rondo. Beethoven knows what he is doing. And then note: The shortest development section ever. A mere 12 bars.

This is a model for a classical Sonata of Beethoven's early period.

It is our first Sonata in this series, so we do not have anything to compare it with yet, although (from experience) we already see that there are techniques and motives, which Beethove will take over to next sonatas, and we are going to explore the Cm Sonatas first. Which are this one Opus 10.1, Opus 13 (Pathetique) and Opus 111 (Beethoven's last one)..